The built-in sonar capabilities of the GPSMAP 7416xsv include 1 kW dual CHIRP sonar, the most sophisticated sonar technology available (transducers sold separately). Dual CHIRP sonar provides outstanding clear target separation and definition, putting even more energy onto the target than CHIRP. It has the ability to show low/high, med/high or low/med on the screen at the same time, enhancing the users ability to distinguish between game fish and balls of bait fish. The unit utilises both a CHIRP DownVu and CHIRP SideVu scanning sonar that provide nearly photographic sonar images of fish and structure that passes below the vessel. Garmin DownVu and SideVu provide the clearest scanning sonar images on the water. Also supported are 50 kHz/200 kHz, 77 kHz/200 kHz and Minn Kota and MotorGuide trolling motor transducers (sold separately). GPSMAP also includes sonar-recording capability that coordinates the timing of the sonar return with the boat's position and saves digital information for playback on a computer using HomePort planning software.

Add a Garmin open array or dome radar, including the powerful xHD2 open array radars or xHD dome radars that pairs ease of use with advanced open array features. GPSMAP 7412xsv allows the sharing features with other compatible GPSMAP units, such as sonar, radar, supplemental maps and user data, including waypoints, routes and tracks. User data entered into one chartplotter can be automatically synced with other chartplotters in a network.

The GND 10 black box interface (purchased separately) seamlessly integrates Nexus instruments and sensors with the Garmin family. It converts data between the Nexus network and NMEA 2000 to provide trouble-free compatibility between Nexus and Garmin products.

Garmin Helm allows the user to view and control any compatible Garmin chartplotter from a compatible smartphone or tablet while providing enhanced situational awareness for the mariner. Easily switches between portrait and landscape mode to accommodate mounting preferences.

The Enhanced Auto Guidance allows the location to where you want to go and patented Garmin Auto Guidance technology instantly searches through relevant charts to create a safe virtual pathway on the display that helps avoid low bridges, shallow water and other charted obstructions en-route.

The user can also save any plotted Auto Guidance paths for future navigation by backing them up on an SD card with the BlueChart g2 Vision or Lake Vu HD Ultra cartography. Note; HD Ultra SD card required for this technology.

The Garmin GPSMAP 7416xsv has the ability to be matched to one of the outstanding Panoptix Down transducers to provide three remarkable views, allowing fish in the water column to be seen in 3-D, from the bottom to the surface. Garmin's quatix 6 is more than a watch, it is designed and manufactured to provide comprehensive boa… 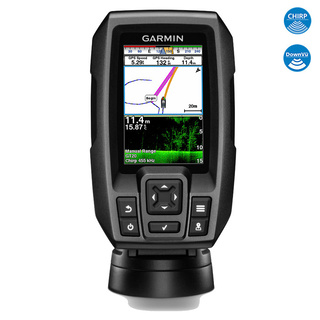 The STRIKER Plus 4 fishfinder with a bright 4.3 inch display and built-in GPS features CHIRP sonar f…