The Garmin GPSMAP 1022xsv features a large, bright 10 inch screen coupled with a quick and easy to use keypad interface with user-programmable keys and a multifunction control knob and has built in support for Panoptix all-seeing sonar and premium Garmin sonar modules (sold separately).

The built-in Wi-Fi connectivity provides an interface with BlueChart Mobile 2.0 and Garmin Helm apps. Garmin Helm allows the user to view and control an on-board compatible chartplotter from a compatible smartphone or tablet while providing enhanced situational awareness. With BlueChart Mobile, a free app downloaded from the App Store, reliable weather information is available while planning marine routes on an iPad or iPhone and allows wireless transfer to your boat's compatible networked Garmin chartplotter. The unit also allows streaming and control of a Garmin VIRB action camera from the chartplotter.

Networked combos can share their internal sonar with any other device on the network. The user may also choose the type of information that is overlaid on the sonar screen; for example, radar, time of day or GPS speed.

Heading, position refreshed 10 times per second through fast, responsive built-in 10 Hz GPS and GLONASS to make movement on the screen more fluid. It makes dropping up to 5,000 accurate waypoints and finding your way back to them quick and easy.

Quickdraw instantly creates personalised HD fishing maps on screen with 300mm contours by utilising the Quickdraw feature with the ability tailor them to fit the user's needs. 3 gang panel with the inclusion of a handy cigarette power socket with cover. Injection moulded plas… Garmin STRIKER Plus 4cv 4 3.5" CHIRP Fishfinder With DownVu And GPS

The STRIKER Plus 4cv fishfinder with a bright 4.3 inch display and built-in GPS features Quickdraw C… 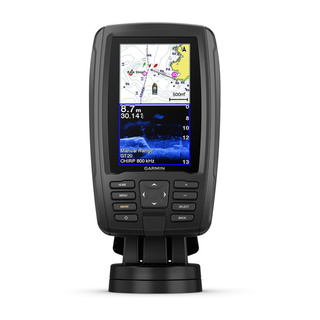 Garmin echoMAP Plus 45cv CHIRP 4.3" Fishfinder With DownVu And GPS

This compact combo has lots of built-in benefits. Easy-to-install and even easier to use, it has a b… Garmin STRIKER Plus 5cv 5" CHIRP Fishfinder With DownVu And GPS